GROWING UP PEDRO, Behind the Scenes: Illustrating Page One

When I was trying to figure out how to handle the opening page of Growing Up Pedro, my first idea was to start off the book with this quote from Pedro himself:

"Ramon is the biggest reason I have gotten where I am. He is the great one in this family. I am still Ramon's little brother." -Pedro Martinez, 1998.


I liked this quote, because it introduced the main theme of the story, and showed that even when Pedro was at the height of his fame, he still gave all the credit to his big brother. For the accompanying image, I wanted to show Pedro Martinez pitching at Fenway Park in 1998, his first season with the Red Sox. I wanted to somehow capture the excitement of being at Fenway when Pedro was pitching. This is the first book I've ever done about a player I actually got to see in person, so this is the first time I really got to pour my own memories into my story and illustrations.

My first scribbly sketches centered around Pedro on the mound. But none of them felt quite right. So I tried to think back to what it felt like to be at the park on days when Pedro was pitching. I remembered fans waving Dominican flags. I remembered the excitement outside the park, where guys from WEEI handed out K cards to fans as they entered the ballpark (K is the baseball symbol for strikeout). I remembered people going to get food when the Red Sox were batting instead of when the visiting team was batting, so they didn't miss Pedro. And perhaps the most iconic image I could think of when I remembered those days at Fenway: The K Men, out in the last row of the bleachers, dressed all in red, right down to the paint on their faces, celebrating each of Pedro's strikeouts by posting a big red K up on the green wall, and leading the crowd in chants of Pay-DRO! Pay-DRO!

Then I had an idea. I realized that to capture all that excitement, I didn't even need to show Pedro. I just needed to show a small section of the bleachers. Because back then, you could tell Pedro was pitching just by looking around, and feeling the energy in the park. So I made this sketch: 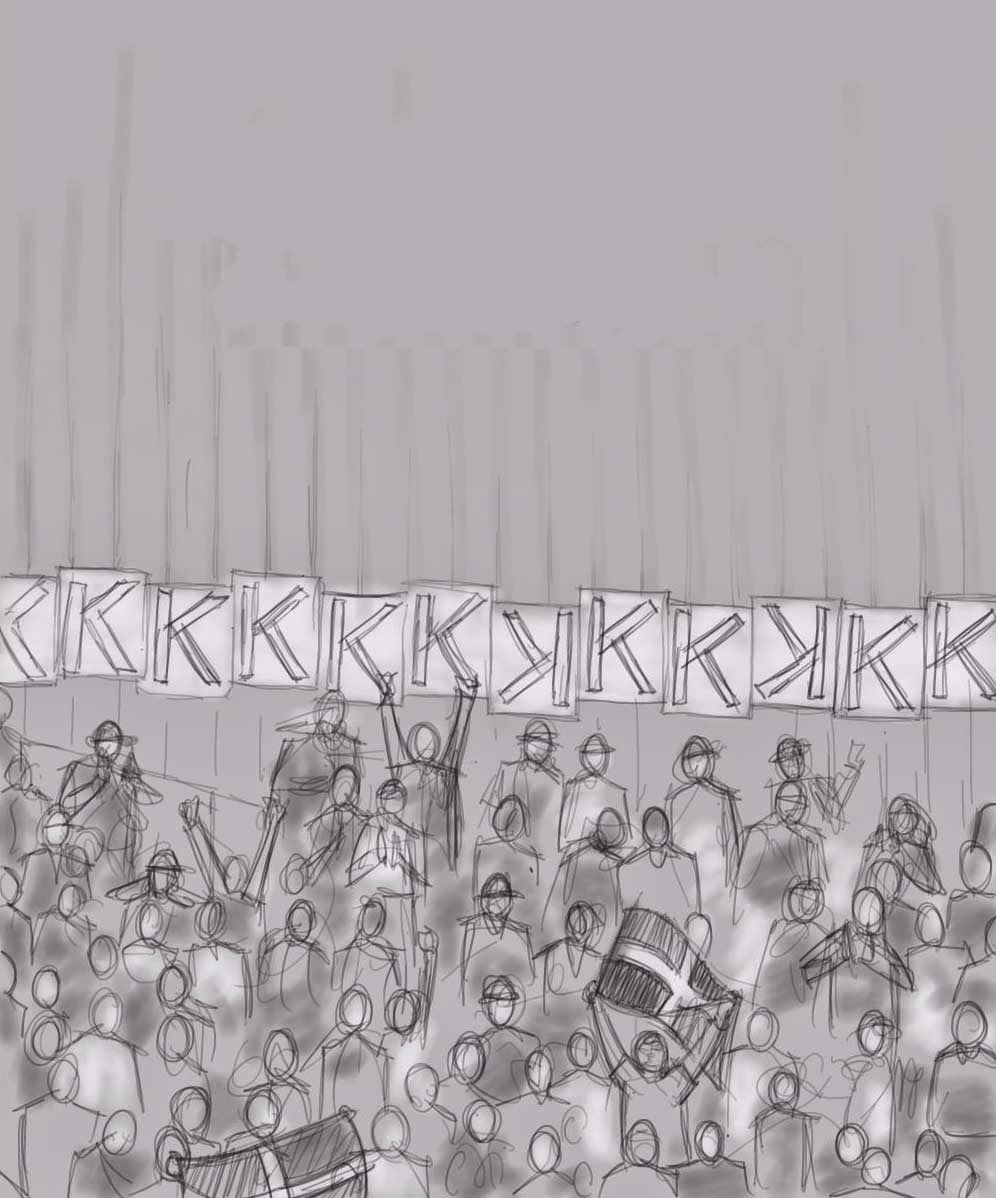 I submitted this sketch to my art director with a note suggesting that the endpapers be red. I liked the idea of opening up the book and seeing the green wall on page one up against the red endpapers, which would match the red Ks and the red details in the crowd. I wanted the book itself to feel like Fenway.

Here's how it ended up looking in the book: 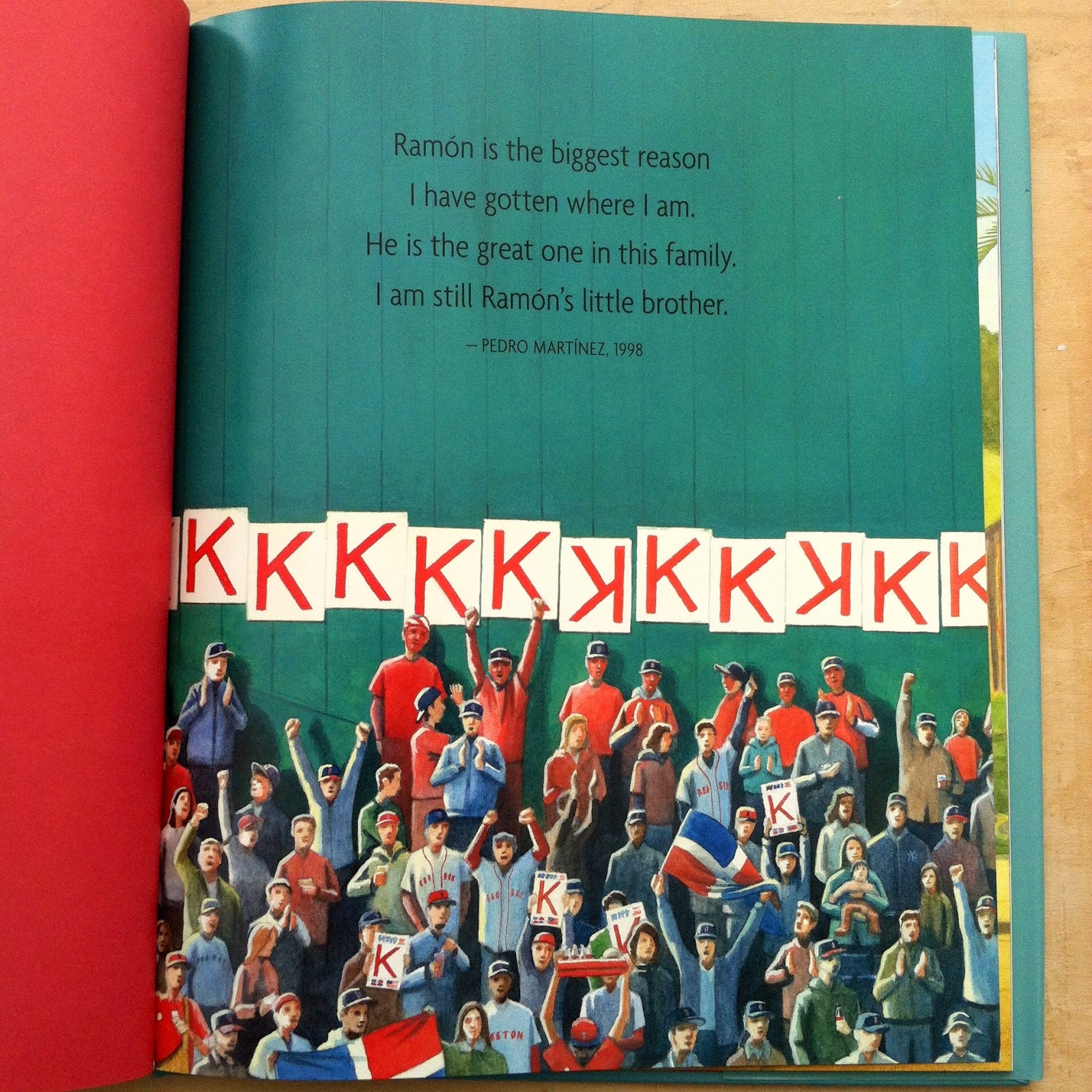 One reason I loved working on this book was the fact that I felt personally connected to so much of the subject matter. Take the K Men for example. I first knew about them when they started appearing at all of Pedro's home games in 1998, dressed all in red, posting Ks. I sat a few rows in front of them during game 4 of the 1999 ALDS against Cleveland, and really got to experience first-hand the excitement they brought to the game.

A couple years later, I became friends with some of the K Men, when they asked me to sign books at a fundraiser they were organizing. They invited me to come post Ks with them some time. The first time I took them up on their offer was Opening Day, 2003.


A couple years later, we joined the K Men again. By now, they had relocated to their new home, prime real estate atop the Green Monster. This time I went all in with the red face and all red clothes, and my 11-month-old daughter became the first-ever K Baby!

Then in 2013, with the Red Sox on the verge of clinching the American League East division, I got a text from Kirk, asking if we'd like to join them up on the wall that night. So we dig through our shelves looking for red clothes, picked up the kids from school and drove down to Boston.

As you can see, the K Men have chilled out a bit in the post-Pedro years. They don't paint their faces any more (they call it "K-Kasual"). But as you can also see, my older daughter is a purist.

We posted Ks for Jon Lester, and we talked about Pedro (that's why I had gotten in touch with Kirk in the first place, to talk about Pedro and to ask if he might have some photos of the K Men I could use as reference for my illustrations). And we got to be there when the Red Sox celebrated on the field. My K Kids each got a chance to post Ks, holding them up for the whole ballpark to see. It was a night we will never forget.

A few other little details to look for on page one of Growing Up Pedro:

*Both my kids are in the picture, dressed just how they were on that night in 2013 when we posted Ks. Can you find them?

*There is one Yankee fan in the picture, my friend Jim who helped make it possible for me to go to the Dominican Republic and do some research for this book. He's wearing a Yankee jacket in the illustration, though Jim pointed out that I seem to have accidentally (or subconsciously?) painted a little red dot on his cap, so it looks like a Red Sox cap. See if you can find him!

*Back then, there was a peanut vendor who would throw bags of peanuts incredible distances with amazing accuracy. I included him in the crowd on page one. See if you can spot him! Here's a picture of him I found online:

I loved being able to incorporate so many of my own personal experiences into this book. It made the whole thing feel so personal for me.

All of that was just for page one. I still had thirty-nine pages to go...

And that's why my books take me a really long time! 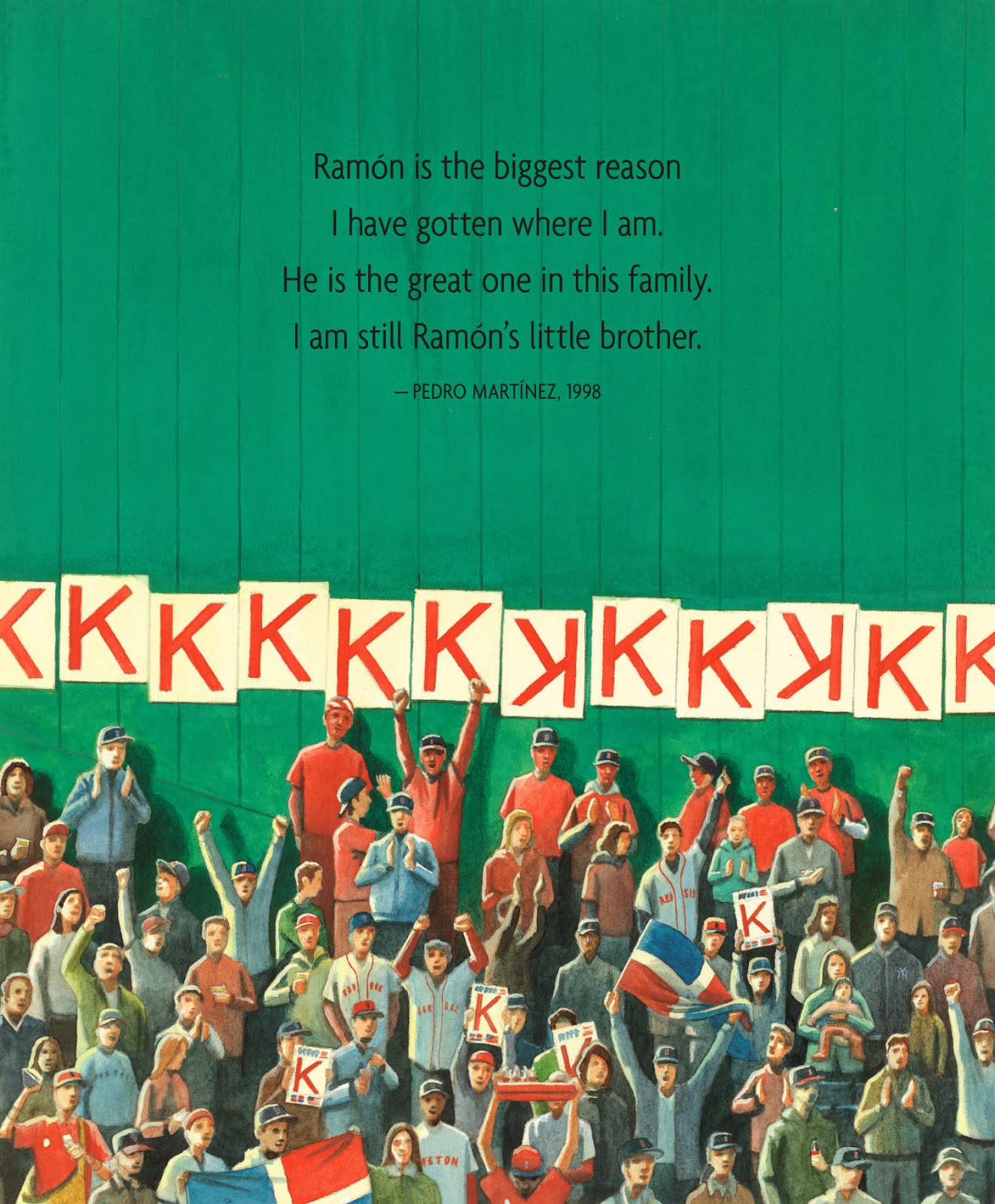