Spoiler Alert: This post contains information about stuff that happens toward the end of Red & Lulu.

Caveat to the Spoiler Alert: But one thing I realized while working on this book is that I don’t think spoilers really apply to picture books in the same way they apply to, say, novels or movies. A picture book might take five minutes to read, but if all goes right, a kid is going to want to read it again and again, even though they know exactly what is going to happen after that first 5-minute read. That’s why I feel okay sharing some details that might be considered “spoilers”. Hey, you might even say there’s even a big, sparkly spoiler right on the front cover of the book... 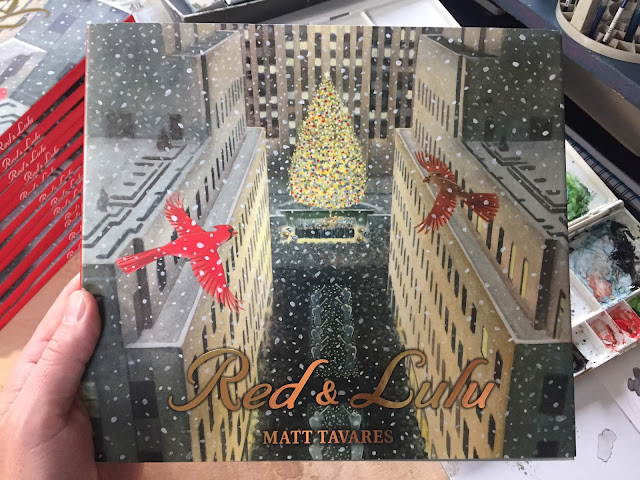 Red & Lulu is my nineteenth book as illustrator, and my ninth as author-illustrator. You might think that after two decades of making picture books, I would pretty much have it figured out by now. But unfortunately, you would be wrong. I’m still learning how picture books work, and I learned a lot working on this one.


Here’s something I learned on this, my nineteenth picture book: sometimes you need to let the reader do some of the work.

Before Red & Lulu was even printed, I decided to try it out at a couple school visits, to see how it worked as a read-aloud. Over the past few years I had shared many versions of Red & Lulu with friends, family, and a few fellow author-illustrator types, so I had gotten plenty of helpful feedback. But this would be the first time sharing the final book, as it would appear in print.

At this point, first proofs had been printed, and stapled review copies were ready to send out. So this was very late in the process. I had digital files of all the spreads, so even though I didn't have a physical copy of the book, I could easily share it with an audience as a slide presentation.

So I read it to a few groups of kids, and it went really well. But there was one part that didn’t feel quite right, and I wasn’t sure why. In a pivotal scene toward the end of the story, where Red finally finds the tree and is reunited with Lulu, kids didn’t seem to be reacting the way I expected them to. Here are the pages I’m talking about.

And then you turn the page...

When I read the words “Their tree! More sparkly than ever, but definitely theirs!” I expected to get some sort of reaction from the crowd– cheers, gasps, some sign of joy or excitement. But it seemed like as I read those words, I was the only one who was really excited about it. It felt weird.


One night, I was laying awake in the middle of the night thinking about this, going through the words and the page turns, trying to figure out what the problem was, and I had an idea.

At my next school visit, I tried something different. When I turned the page after the words, Then he turned the corner, instead of saying Their tree!, I didn’t say anything. I just waited for a bit and let the kids look at the picture.

And something really awesome happened. There was this great moment when some of the kids realized that this might, in fact, be Red and Lulu's tree. I heard a few little gasps, and quiet whispers of “Their tree!” and “I think that’s their tree!”. But they didn’t know for sure. There was still some mystery and wonder. That is what I was missing before.

So I wrote to my editor and art director and explained the situation, along with this image, showing my suggested changes:

This was very late in the process to be making changes, so I wasn't sure how thrilled they would be about my suggestion. But they agreed, and we made the change. Here’s how those pages ended up in the actual book:

Then you turn the page...

Now, the picture does more of the storytelling, and there is a feeling of wonder as you head to the next page. By removing the words, “Their tree! More sparkly than ever, but definitely theirs,” I am asking the reader to do more of the work, and providing the reader with that moment of discovery that I was robbing them of before. Clearly Red thinks this is his tree- he is chirping with glee. But we don’t completely know for sure until we turn the page.


What happens next? You’ll have to read the book to find out!

Spoiler alert: It all turns out okay in the end.