Over the River events... 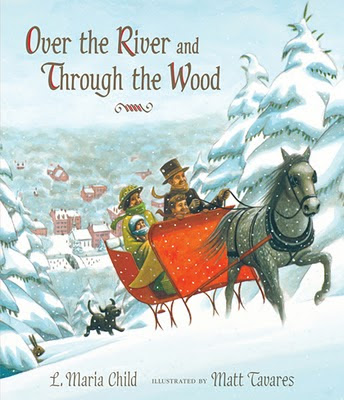 My new picture book, Over the River and Through the Wood, is now available! So far so good- it's gotten some nice reviews, and already won an Oppenheim Gold Seal Award. Starting this weekend, I'll be visiting bookstores and libraries (and a museum) around New England signing, reading, and talking about it. If you can make it, please stop by and say hi! Here's where I'll be:

Over the River and Through the Wood comes out today!

Visit Indiebound.org to find it at a bookstore near you!


Posted by Matt Tavares at 8:00 AM No comments:

Email ThisBlogThis!Share to TwitterShare to FacebookShare to Pinterest
Labels: candlewick press, l. maria child, matt tavares, over the river and through the wood, thanksgiving

I'm proud to have a piece of artwork up for bid RIGHT NOW in the Banned Books Week Auction. The auction is run by The American Booksellers Foundation for Free Expression (ABFFE), the booksellers' voice in the fight against censorship.

Founded by the American Booksellers Association, ABFFE has been protecting the free expression rights of booksellers and their customers for over 20 years. ABFFE is a founding sponsor of Banned Books Week and the Kids Right to Read Project, a joint initiative with the National Coalition Against Censorship that opposes the removal of books from schools and libraries.

I originally donated this painting, an outtake from Henry Aaron's Dream, for the ABFFE silent auction at Book Expo America. But they set it aside along with 69 other works by some pretty amazing illustrators, so they could do this online auction.

The cool thing about this auction is that  a) you don't have to be at BEA to bid, and b) all the bids start at the ridiculously low price of 99 cents! Even now, with only 1 day to go, I don't think any item has gone over $200. This is a rare opportunity to get a great deal on some original artwork by some of the best children's book illustrators in the biz. In this first group alone, there is work by Adam Rex, Paul O. Zelinsky, Rosemary Wells, Wendell Minor, Hans Wilhelm...!

Posted by Matt Tavares at 5:55 AM No comments:

Over the River and Through the Wood trailer

Watch me work! Hear me whistle!!
Over the River and Through the Wood will be available in bookstores on September 27.
Posted by Matt Tavares at 6:01 AM 2 comments: