THE TRUE STORY OF HANK AARON'S FIRST START FOR THE BRAVES 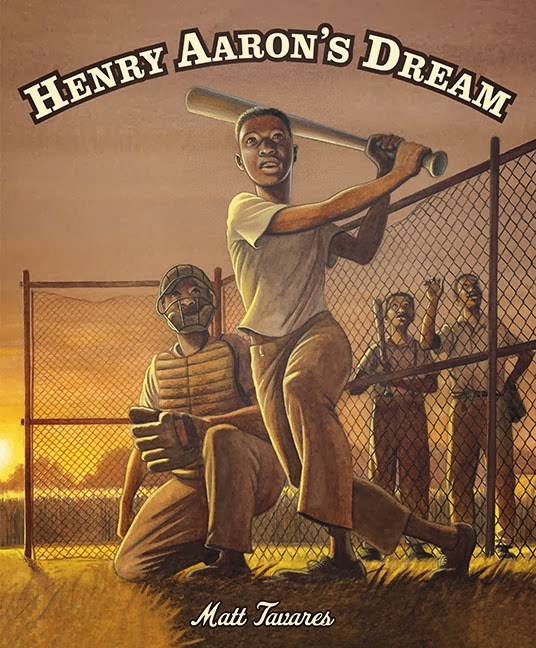 During a recent panel discussion about picture book biographies at the AASL (American Association of School Librarians) National Conference, I talked about uncovering a little bit of baseball history when I was doing research for my book, Henry Aaron's Dream. I've gotten lots of great feedback about that part of the presentation, so I thought I'd post the whole thing here, so librarians and teachers can share it with their students. And I think hardcore baseball fans might find it interesting too. Here goes...

According to just about every book written about Henry Aaron, here's how he first broke into the Braves' starting lineup:

He was a 20-year-old minor leaguer, traveling with the big-league Braves during spring training in 1954, playing the last few innings of each game. Then on March 13, the Braves' starting left-fielder, Bobby Thomson, broke his ankle during a spring training game. The very next day, on March 14, the Braves played the Boston Red Sox in Sarasota, and Henry Aaron was the new starting left-fielder for the Braves. He hit a home run that day, and the sound of his bat hitting the ball was so spectacular that the great Red Sox superstar Ted Williams came running out from the clubhouse to see who had hit that ball.

As the story goes, if Bobby Thomson hadn't broken his ankle, Henry Aaron might not have gotten his chance to prove himself in 1954.


This was a major moment in Henry Aaron's journey to the big leagues, and it's a wonderful story, especially the part about the great Ted Williams simply hearing the home run, and knowing that this 20-year-old kid was something special. So of course I wanted to write about it in Henry Aaron's Dream.

Researching this moment was pretty straightforward, because I found several sources which all told basically the same story, including Henry Aaron's excellent autobiography, I Had a Hammer. I even found an article written by Ted Williams himself where he tells the story. Check any timeline of Henry Aaron's life, and you'll read about the home run he hit against the Red Sox in Sarasota on March 14, 1954. No doubt about it, that's what happened.

The problem came when I tried to illustrate it. I decided to show Henry in the dugout, seeing his name in a major-league starting lineup for the very first time. For this picture to work, his name needed to be legible, which meant that all the other names on the lineup chart also needed to be legible, which meant that I somehow had to find the lineups from the March 14, 1954 spring training game between the Milwaukee Braves and the Boston Red Sox. 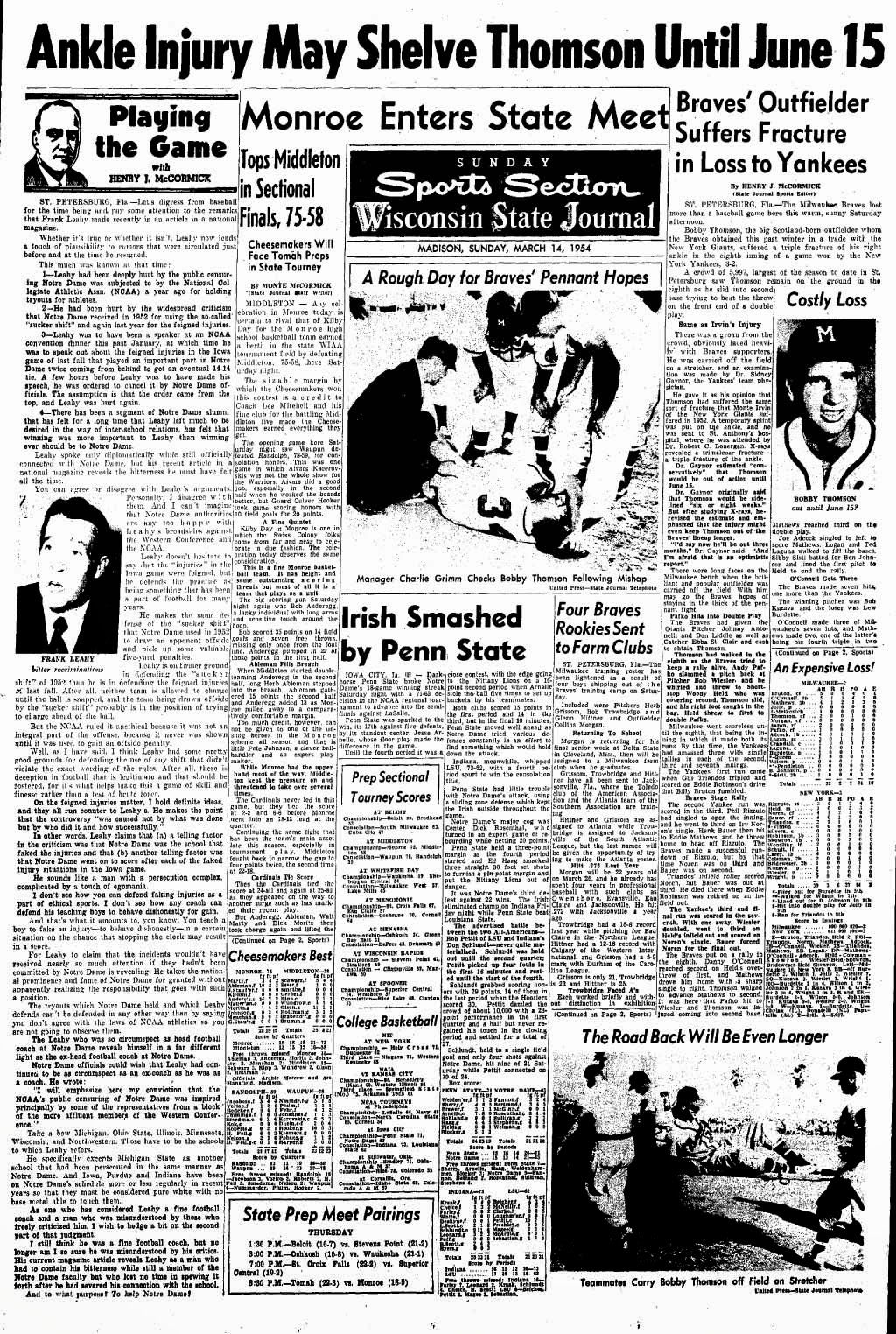 So far, so good. Now I just needed to find the box score from the Red Sox- Braves game in the next day's paper and I'd be done.

And this is where the whole story started to unravel. Here are the recaps from the spring training games played on March 14, 1954, the day of Henry Aaron's legendary home run against the Red Sox in Sarasota. Notice anything strange? 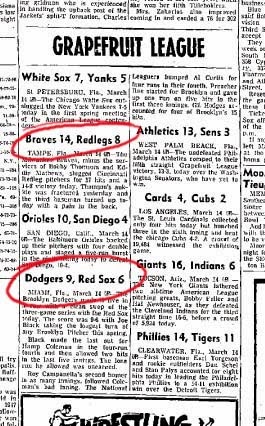 According to this newspaper, the Braves did not play the Red Sox in Sarasota on March 14, 1954! They played the Cincinnati Redlegs in Tampa, while the Red Sox were in Miami playing the Dodgers.

Could every book I had read about Hank Aaron have gotten this wrong? Apparently, according to the newspapers from 1954... yes.
I searched through all the Braves-Red Sox games in the schedule, and couldn't find any home runs hit by Hank Aaron. Then finally I found it. The Braves and Red Sox played a make-up game in Sarasota on March 10: 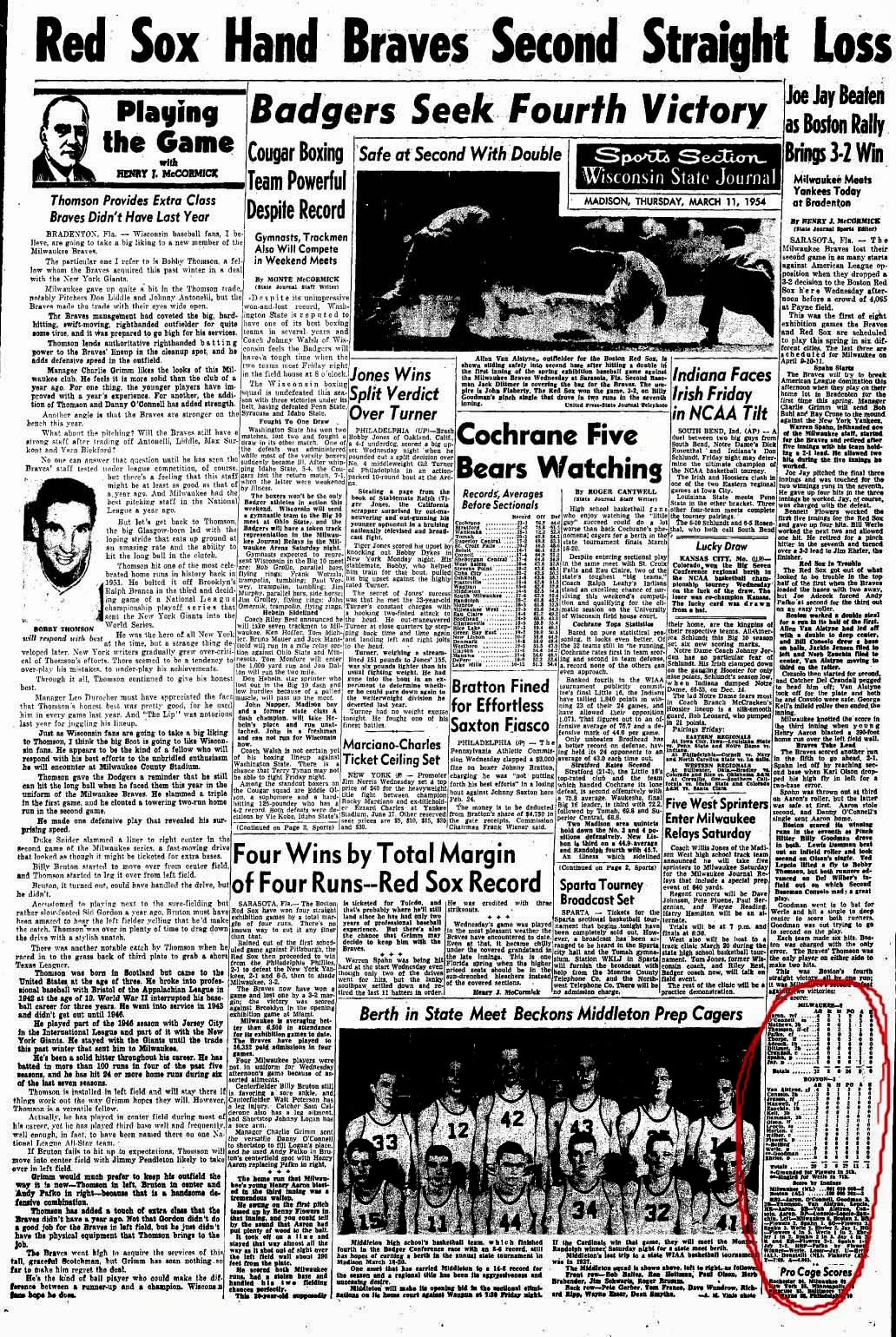 Henry Aaron's name was in the starting lineup for the very first time on March 10, 1954, in a spring training game against the Boston Red Sox in Sarasota, three days before Bobby Thomson broke his ankle. Here's a close-up of the box score. Aaron is batting leadoff and playing right field (he wouldn't take over the left field job until March 29) and Bobby Thomson is batting cleanup, starting in left field:

Henry Aaron hit a home run that day, and his name remained in the starting lineup for most of the next twenty-three seasons. This was certainly a big day in young Henry Aaron's life. But it didn't happen quite the same way as everyone says it happened.

By the time Bobby Thomson broke his ankle on March 13, Henry Aaron had already cracked the starting lineup, partly because he was hitting .400 after the first few games of the spring, and party because of injuries to two other outfielders, Bill Bruton and Walter Peterson, on March 7 and 8, respectively.

And there's one other little problem I discovered. Check the box score again. Looking through the Red Sox lineup, you'll notice that Ted Williams's name is nowhere to be found.


I did a little more research in the Boston newspapers and found that Ted Williams broke his collarbone on March 1, 1954. He underwent surgery in Boston on March 9, one day before this game. This is what Ted Williams looked like on March 10, 1954: 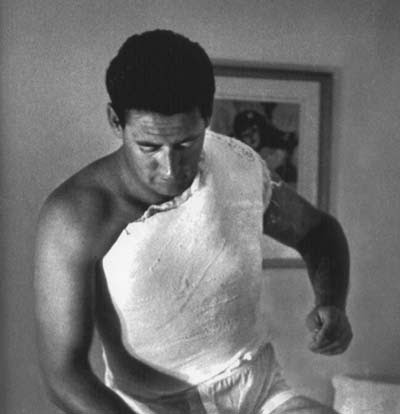 He was not released from the hospital until the following week. Ted Williams certainly may have remembered hearing Hank Aaron hit a home run, but he wasn't there for this particular home run on March 10, 1954.

If there were no illustrations in Henry Aaron's Dream, I probably never would have stumbled upon this little piece of history. If I hadn't decided to draw a picture of the lineup chart, I might never have looked at the old newspapers. But I'm glad I did. There was something incredibly exciting about this process of digging through old newspapers, finding out what really happened. And that excitement is part of what I love about making nonfiction books. There's a detective-work aspect to it, and oftentimes my research takes me to places I did not expect to go.

But this example also shows how difficult illustrating a non-fiction book can be. It's one thing to find a few sources that tell how something really happened. But when you actually try to draw a picture of what it looked like while it was happening, you might run into a whole other set of problems.

I'm sure some serious baseball fans will notice the discrepancy between my book and other books about Hank Aaron, but maybe they'll end up reading this article and hopefully they'll find the whole thing just as fascinating as I did.


Note: A few months after Henry Aaron's Dream came out, Howard Bryant's excellent biography, The Last Hero: The Life of Henry Aaron was released- the first book I've found that accurately told this part of Hank Aaron's story.
Posted by Matt Tavares at 9:53 AM 1 comment: